Day 1 is finally upon me! I’ve got my setup ready as of last night after making a road trip to IKEA in Memphis, TN. After the price of gas I probably could have gotten a desk, chair, and that plastic thing you put on the floor for the same price here in Nashville but why not go to IKEA? I also know people are crazy for IKEA stuff so if we end up getting rid of this stuff someone will buy it quick! 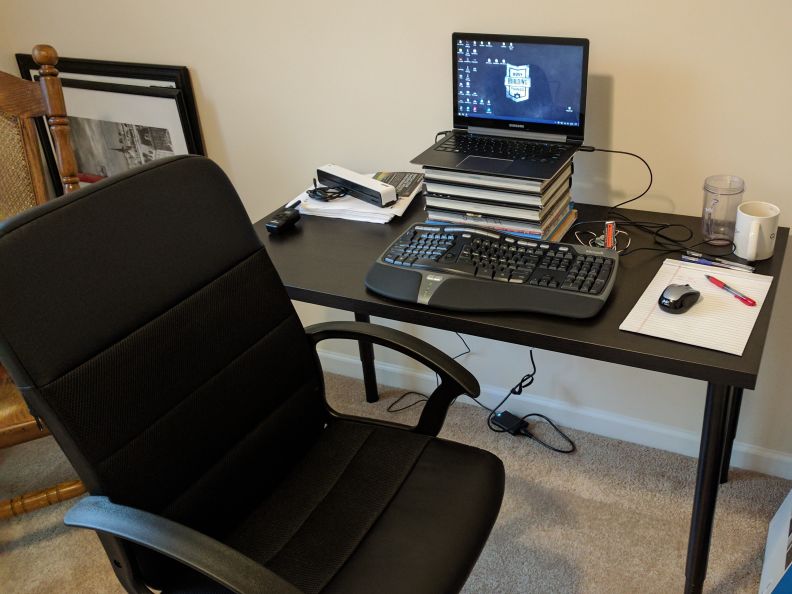 Yes, that’s a stack of high school yearbooks propping up the laptop to almost eye level. As I’m not working right now a few niceties had to be skipped. Like, I would’ve loved a 27” monitor on an articulating arm, but, in the future. This setup worked surprisingly well. Although, the $50 IKEA chair isn’t as comfortable as pretty much any other desk chair I’ve ever used. It gets the job done though and it’ll force me to stand up every once and a while.

Coding wise it was a good day. I’m still in the Bootcamp Prep track but I chatted with someone much further along and they said it rolls right into it so it’s not a waste of time. I was also informed the full track should open up for me tomorrow as it might take a day for my payment to clear. I completed 24 JavaScript lessons today and worked for probably <4 hours. Up at 6am and coding by about 7am. Then stopping at 8am when the kids got up. About an hour during nap time. Then back at it after dinner but before the kiddos bedtime and right until now (shy of 10pm). I should be in bed by 10pm getting me my 8 hours. This is my schedule for almost all weekdays now.

While a most of the work I did today was review or reinforcing things I did learn some stuff. The biggest thing is arrow functions in ES6. I didn’t dive into it but saw a comment on Facebook regarding using Babel so ES6 things are supported across most web browsers. Oh yeah, back to arrow functions. They take the word function out of the function. I thought this was awesome since I know I’m going to be doing a lot of typing.

Here’s the quick rundown on how they work:

I won’t go deep into arrow functions (get more at MDN and here) but this can save typing of the word “function” a lot. Unfortunately, while trying to use this on lessons I ran into it not passing tests. It seems like not all of the Bootcamp Prep lesson plan has been updated to support ES6 just yet. I did talk to a mentor person who said lessons should allow for ES6 though, so that’s good. I’d like to build good habit using some of the newer syntax when I can.