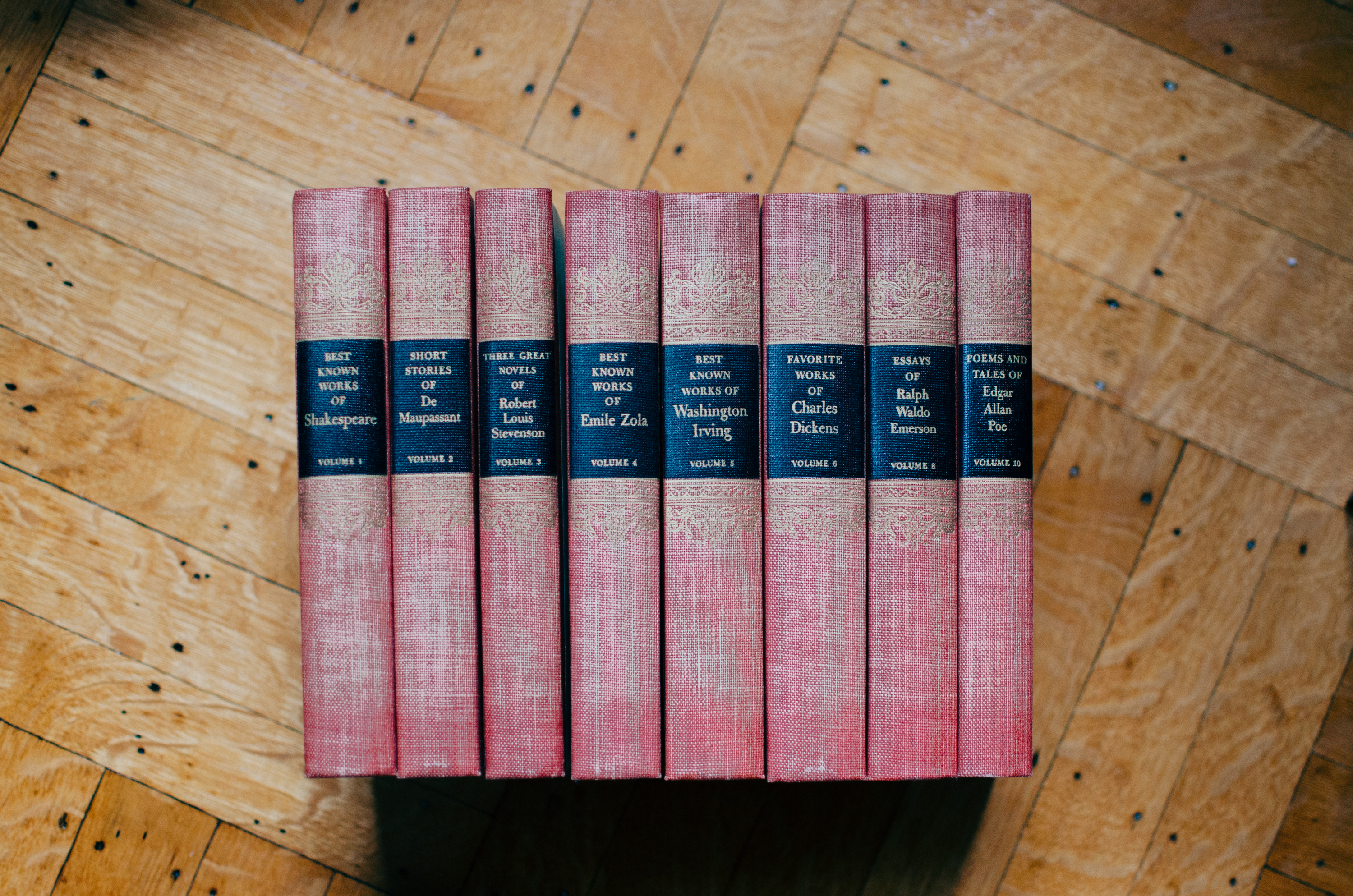 Partials are coming together more and I have to say they’re pretty sweet. Rails does some automagical stuff that I can’t completely wrap my head around just yet. However, I probably won’t be able to for a while as the people who created it are WAY smarter than me. However, as an example there’s this sequence of things that Rails does:

The craziest part to me is this little bit that I was taught about <%= render @posts %> which I have bolded for emphasis:

This approach is a bit more abstract. Under the hood, Rails uses the convention that you will have a partial with the name of the models in the collection. Rails will even render a collection of heterogeneous models ([customer, order, customer]) calling the correct partial for each one.

I also took part in a virtual stand up yesterday morning. The instructor who led it asked me if I felt I was retaining the information with the pace I’ve been going (~5 lessons/labs/lectures per day). At the time I said yes because I felt my short days balanced my long days. However, as I worked through some stuff tonight I think my notes are really helping. Pages like this: 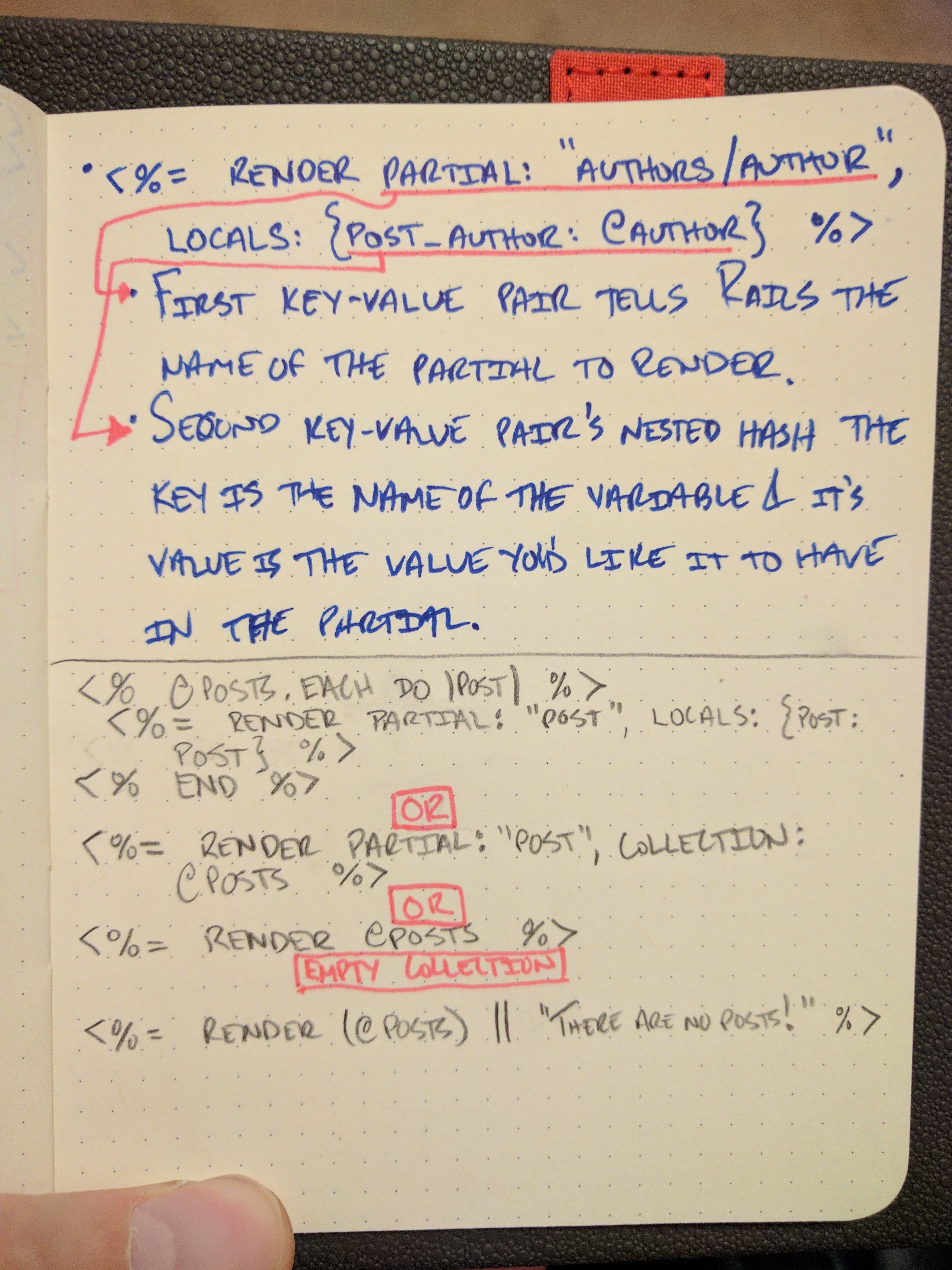 are awesome for me to cement more abstract things as well as provide a quick reference to go back and look at when I need. As I work through the curriculum I’m going to see which notes are truly valuable and get them migrated over to my Code & Quill book for long-term reference.

I <3 the community at Flatiron. Here’s a recent chat thread:

jilustrisimo [08:56]
Has anyone been able to roll out Facebook and/or Google OAuth (via Devise) with > an app they’ve deployed to heroku?

yechielk [08:58]
Make sure you change the app’s URL with Facebook/Google

jilustrisimo [13 hours ago]
[yechielk]2: hey! Do you have any documentation, I’ve been searching on heroku but its either beyond me or not what I’m looking for…I’m not sure where to even place my app_ids/secrets

yechielk [13 hours ago]
I used a gem called figaro

zac-baston [13 hours ago]
figaro is a good option. also could check out dotenv gem (https://github.com/bkeepers/dotenv) (edited)

jilustrisimo [13 hours ago]
thanks @zac-baston Ill check it out. @yechielk I could never figure out figaro, I used dotenv

jilustrisimo [13 hours ago]
I get using dotenv but arent those files not supposed to be pushed up anywhere?

smithwebtek [13 hours ago]
Yes 2nd the reminder about URL pointing back to Heroku (production). http://diet-planner-v8.herokuapp.com/users/sign_in

zac-baston [13 hours ago]
you certainly shouldn’t commit them to version control. looking at the documentation in that Readme from the repo, it has a section on production in which it recommends the heroku config methods

jilustrisimo [13 hours ago]
thanks guys, I’ll read the doc and shout again if I break everything

snsavage [13 hours ago]
In your Heroku dashboard go to settings and click on Reveal Config Vars. Those keys and values should reflect your .env file.

jilustrisimo [13 hours ago]
@snsavage thanks, I think thats what the doc @zac-baston linked was pointing me towards…so theoretically just set them there then do whatever I need to do for the callbacks?

snsavage [13 hours ago]
So if you’re using something like dotenv you just need to set the values in the dashboard. Just keep the keys the same as your dotenv file.

jilustrisimo [13 hours ago]
do I need to do anything regarding the redirect on FB and Google?

snsavage [13 hours ago]
For my Rails app I have the Facebook site url set to https://carbtracker.herokuapp.com/.

jilustrisimo [13 hours ago]
it works! at least for Google. I didnt do FB yet

zac-baston [13 hours ago]
pretty cool stuff about the web interface. I didn’t know that was there.

jilustrisimo [12 hours ago]
I think its new

snsavage [12 hours ago]
It’s hard to find if you don’t know where to look.

Well, I guess I now saved the entire thread for later…