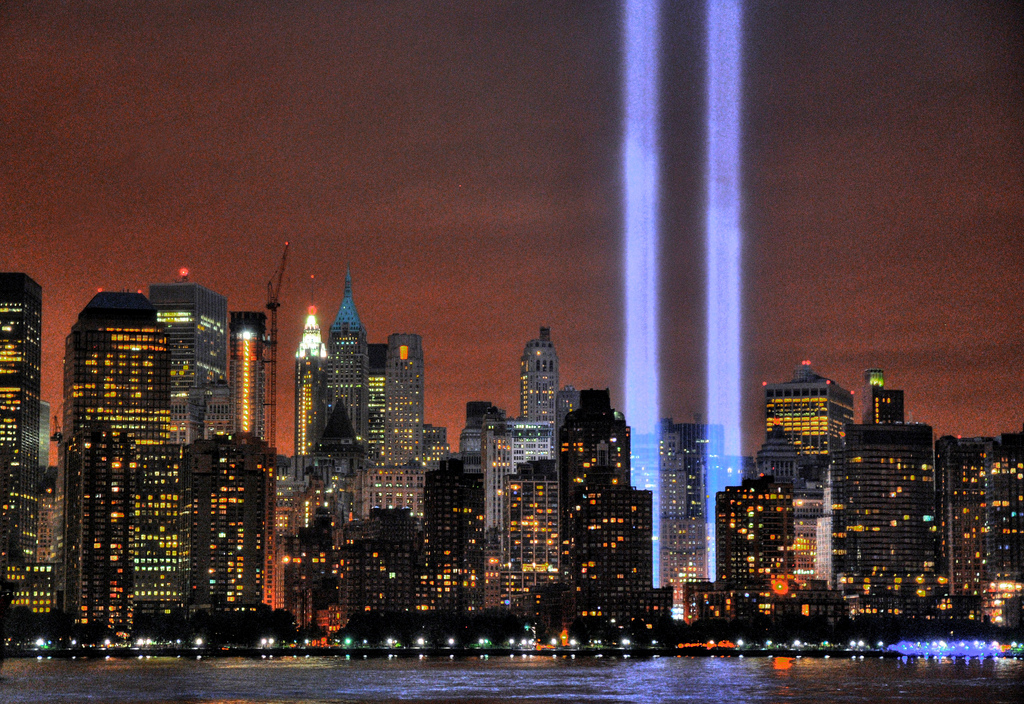 The noted update in the next paragraph was in 2008. Enjoy and share if so inclined.

It took me 5 years to write this. For the past two years, I’ve shared it with those close to me. Co-workers, friends, and anybody else I felt would appreciate or learn from it. I’ve since updated it this year with a few new thoughts. I wrote this September 11, 2006, at 2am Central Standard Time.

For half the country right now it is September 11, 2006. Five years ago was September 11, 2001. We all know what happened. No need to explain. However, it will be today that people will ask me to tell them what I was doing, what it was like, and many other questions as I am from New York City and was a senior in high school in Manhattan on the day of the mass murders. So here it goes.

As any other day, my first class was second period and started at 9am. As any other day, I was late. I emerged from the subway into the concrete jungle of Manhattan at 96th Street and Lexington Ave. Little did I know one of the towers was already burning as I walked to my school in my own world. Staring at the ground listening to music.

I had to get a late pass since I was late and on this day the attendance lady was not in her office. So I proceeded to the principal’s office to get my pass. There was already chatter but I dismissed it thinking a small prop plane or something had been taken out by the building. Because, if a prop plane flew into one of those towers the plane would be more fucked up than the building.

It wasn’t until second period was over and we were on our way to third period that we knew something was seriously wrong. The rumors were flying out of control. After running outside for a quick smoke between periods our crew ran into our dean of students in the hallway. She informed us what was up. Told us that since we were the oldest and most looked up to in the school we had to set the example and be strong. She also told us an announcement was going to be made over the school PA during third period.

The announcement pretty much ended the school day. Nobody did anything else. Third period was AP Logic & Composition and our teacher tried to keep the time academic. Fourth period I interned for a 10th-grade math class. Nothing was done. It was a time of frantic cell phone calls to parents and crying when nobody could be reached. Reports of calls from relatives telling students, “I love you.” That’s all. Never to be heard from again. Calls to friends at Stuyvesant High School only blocks from the towers where so many friends were in school. This school later became a makeshift morgue.

There was one television with cable in our school. It was surrounded behind the stage in our auditorium. F16’s flew over Manhattan about every minute. Military helicopters could be heard as well. At lunch, it was decided that nobody could leave the school until picked up and signed out by a family member or guardian. Arrangements were being made for the younger students to sleep in the school if necessary. This because Manhattan is an island and all ingoing and outgoing traffic had been stopped. Mass transit included. There was a bomb on the George Washington Bridge if you didn’t know. As seniors, we left through a side door and just sat in the arches of our school.

We sat and listened. We had seen enough of the video footage. We sat in the shade with a boom box listening to 1010 WINS. New York’s #1 news station. We watched as buses overloaded took commuters uptown to the end of the line so they could walk the rest of the way home. Watched as thousands walked by us. Watched as people covered in soot who had been walking miles took refuge in our shade and sat and rested while listening to the news asking for updates. We sat and watched and listened not knowing what to do.

With cell phones dead, remember the big ass antenna on top of the tower, yeah it pretty much covered the whole city with cell phone service, we had no connection to anyone. My mother and brother finally got through to me and we made the plan that I would stay at a friend’s house rather than trying to make it back to the Bronx. My brother jokingly told me to get a gun and a bulletproof vest. A joke, but nobody knew if things would take that turn. I’m pretty sure we just sat there for a LONG time. We moved from our spot on Madison Ave. to Park Ave. We had decided to buy some beers and drink the night away. Maybe try and forget about it for a little while and have some fun. It never happened.

Some names flashed through my mind and I found a way to get in touch with central sources of information. My church assured me the few members we had who worked in the towers were fine through “coincidences” or divine intervention, you take your pick. Others were just left to wonder.

We saw a friend at the median on Park Ave. and started talking. Next thing we hear a siren blaring. Flying up Park Ave. is a green Ford Explorer covered in soot. I can still see in my mind the back windows blown out. Shattered from something. I treked cross town to where I was planning on spending the night where I stayed until the news said that some train lines were running. I knew I could make it home now. I left and headed back across town to catch the train. In the time it took to go one stop on the subway I had to get off. There was a fine dust in the air in the tunnel and trains which aggravated my asthma. This is miles away from the towers. Once again I am spending the night at a friend’s house. Nothing else really happened the rest of the night.

We went from place to place trying to do what we did every day. From Mariko’s to Philippa’s but we couldn’t escape it. Every store was closed once dark hit. No alcohol to ease the pain. We sat at Philippa’s for hours with CNN on talking. About what I couldn’t say. Probably some “let’s join the Army” talk and “this is fucked up” talk and “what about so and so whose parents worked there” talk.

I slept that night to the sounds of Army choppers and F16 flyovers. I felt like I was in a war zone. We all did. We even said it. The truth is for once in our lives we were in a war zone and it made us very uncomfortable. There was an attack and it happened on our soil in our city only miles away from where we were.

The next day I made it to a point where I could meet my mother and get a ride home. It was Wednesday and on Thursday, September 13th we were scheduled to drive to Tennessee to look at colleges. We did as we planned and were embraced everywhere we went. The South showed it’s hospitality as did the rest of the country. For those who have never been to New York City and have never come close. We still thank you for everything this country showed to our city and everyone who lives and works there.

The aftermath is well documented. However, for those outside the New York City metro area, I doubt you had video footage every night of the funerals. Funeral after funeral of city workers and the countless others. The flags flew high and proud. Our country was united.

So on this fifth anniversary remember. Say a prayer for those who still hurt. For those like me who see footage on television this time of year and have flashbacks and get chills. Whose eyes well with tears still like mine. For the people who lost and have never been able to find again. That’s all I ask. For remembrance and support to those who lost.

Now you know why if you ask me about that day five years ago I give an abbreviated sugar coated version. Know why I’ll be “out of it” today when you talk to me. Why I’ll probably seclude myself and shun away people at some points. The slogan is “We Will Not Forget,” or “You Are Not Forgotten,” but for people like me it’s, “I CANNOT FORGET!” I remember my first semester at Belmont at a showcase and one of the lighting effects was two straight beams shooting upwards. I had flashbacks to the two beams lighting up the sky where the towers used to be. The Tribute In Light. I held back the tears because I was around all my friends. Just know, that you have no idea.