So you’ve learned some React and built a few things. You’ve probably used create-react-app or react-slingshot to get off the ground quickly with minimal configuration. However, now you’re ready to venture out on your own with your very own React boilerplate.

I recently faced this same dilemma. It was a struggle but at the end of it, I had a solid repo that I could use as a basis for future React projects. I realized I wanted to use webpack because it’s the new hotness (well not so new) but I would have a lot of resources to pull from to figure it out. I have ZERO working knowledge of Grunt or Gulp although with the minimal amount I’ve looked at them they do some cools things in their own right. Also, I know the people I interact with who know more than me use webpack. I also had a reference React boilerplate webpack config I was going to use as a base (I quickly realized I was going to rewrite most of this config).

Back to the Beginning

Let’s take it back though. What really is a boilerplate? Dictionary.com failed in getting me a definition that would work. Oxford Dictionaries on the other hand landed the W with:

3.1 Standardized pieces of text for use as clauses in contracts or as part of a computer program.

This works. So something that’s standard across computer programs. As in some code that’s always the same at least in theory. So instead of having to run things like npm i react react-dom webpack etc… every time we start a project we can copy our boilerplate and be off to the races knowing all the essential pieces we want are ready to go. We’ll also know that everything is being maintained the way we want it to because it’s ours. We also will learn a lot during the process and possibly even decide to make decisions that differ from what others have instructed us to do.

First let’s create a local folder and make this a Git repository. 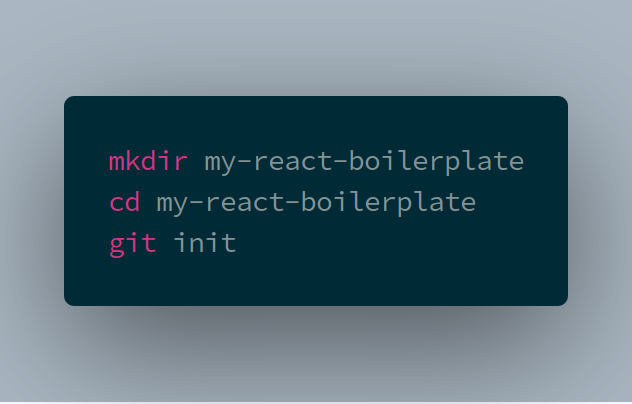 Now, what type of project would this be without a README.md? Every repository should have a readme file. Even if it’s just to remind YOU about how things work. Trust me, it may seem like you’ll remember exactly what each script does and why right now. However, a year from now these readme’s come in handy! Trust me. So, create a README.md in the root of the project. Put something like this in there: 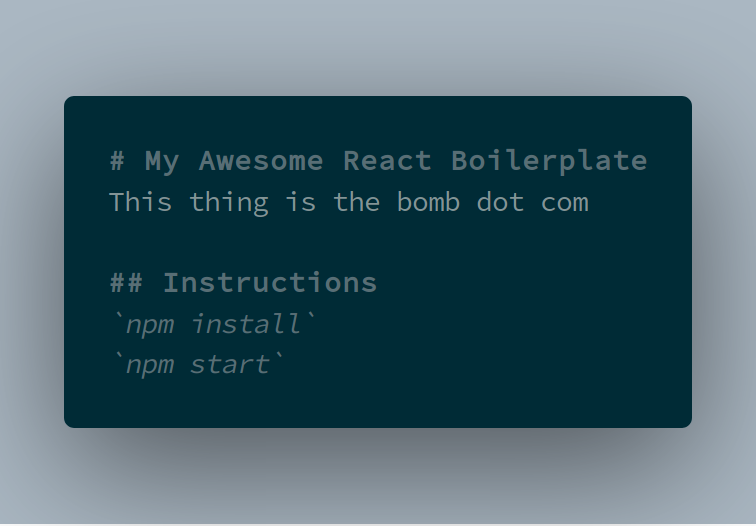 Make sure to commit your files to Git after any changes you make: 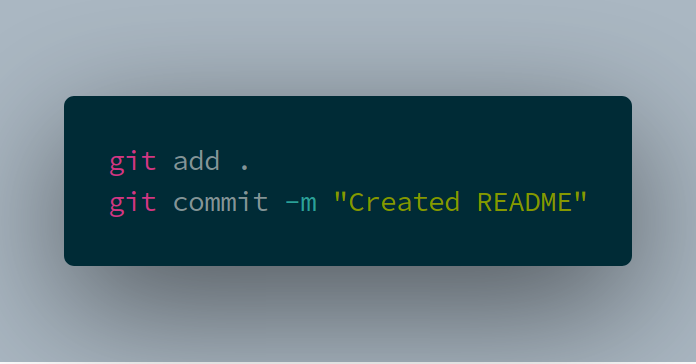 This one is pretty straightforward. Make the following folder structure to house everything: 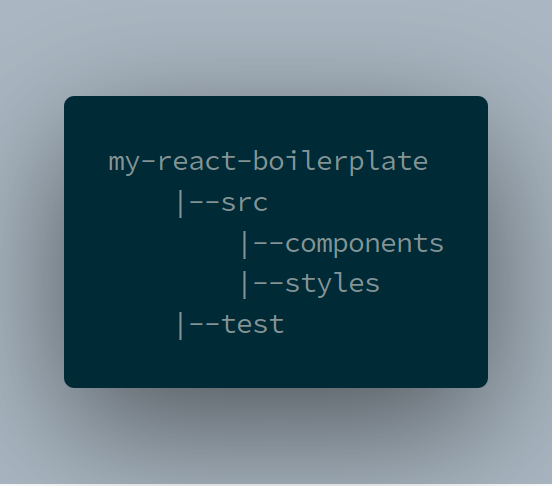 You can accomplish this easily with this command: 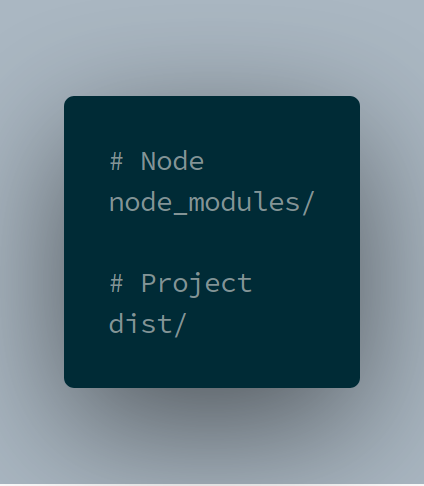 There are generators for this file, like this one, but this should be enough for what we’re doing today.

All node projects must be initialized so we can use the package manager. This will create a package.json file for us which must be in version control.

It contains many things but the most important are:

To start this process enter the following in your terminal in the root of your project: 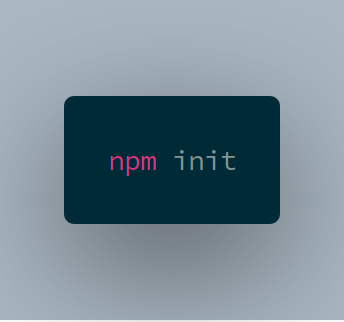 You’ll be asked more than a few questions, feel free to just press Enter and leave it all blank, and in the end you’ll now have a shiny new package.json that looks something like this: 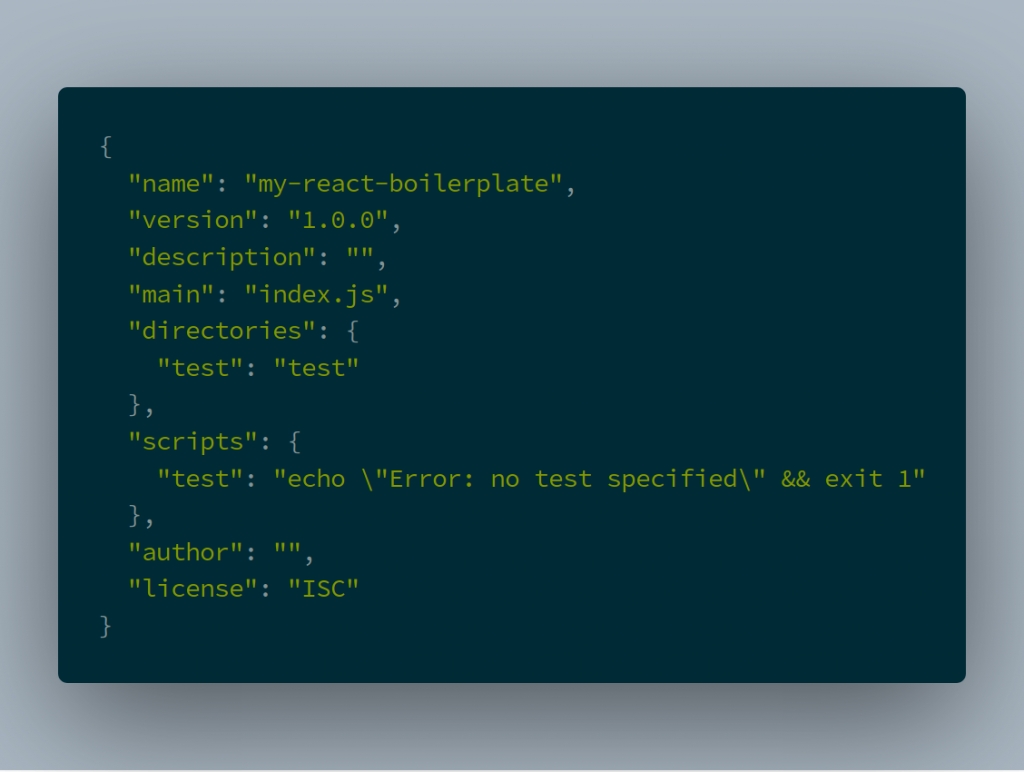 Yes! Time to write some code! Well, this is going to be the most boring HTML you probably ever write. Create an index.html in the root of your project and set it up like so: 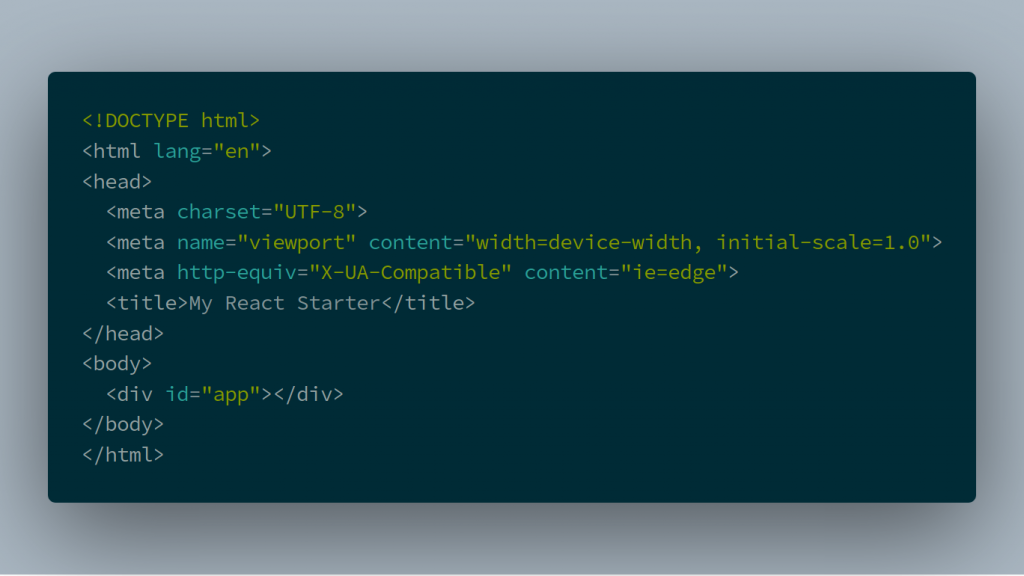 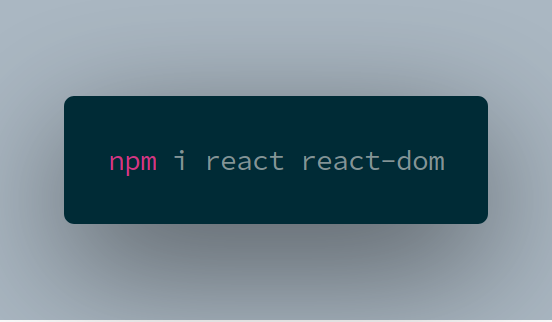 Create this file /src/components/App.js and in it put the following: 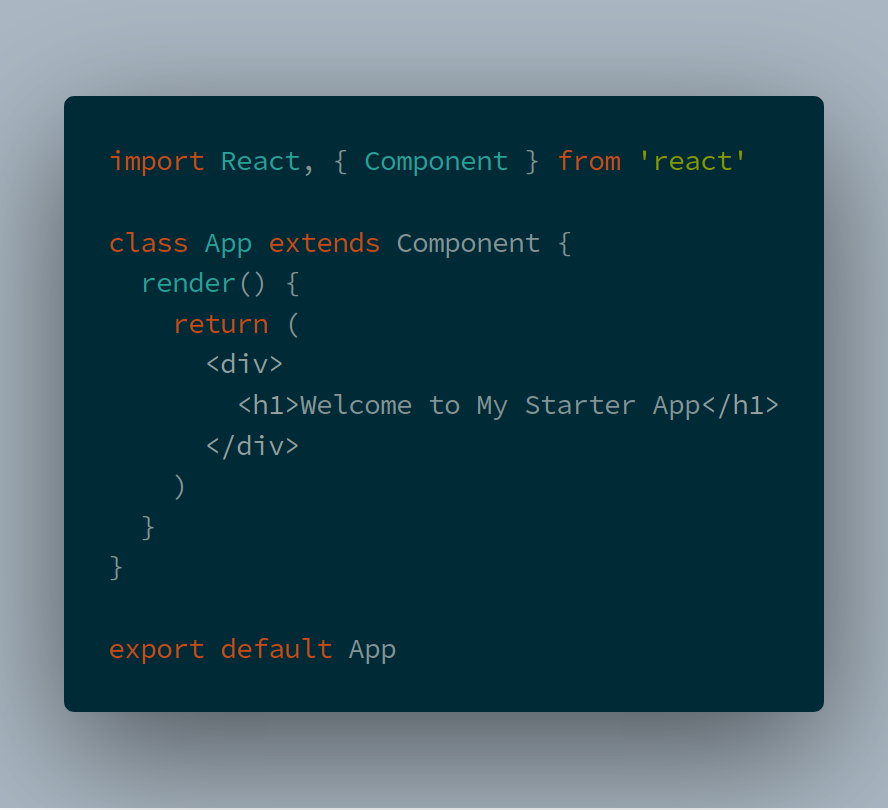 Then we will render the App via an index which we will create here at /src/index.js and put the following in: 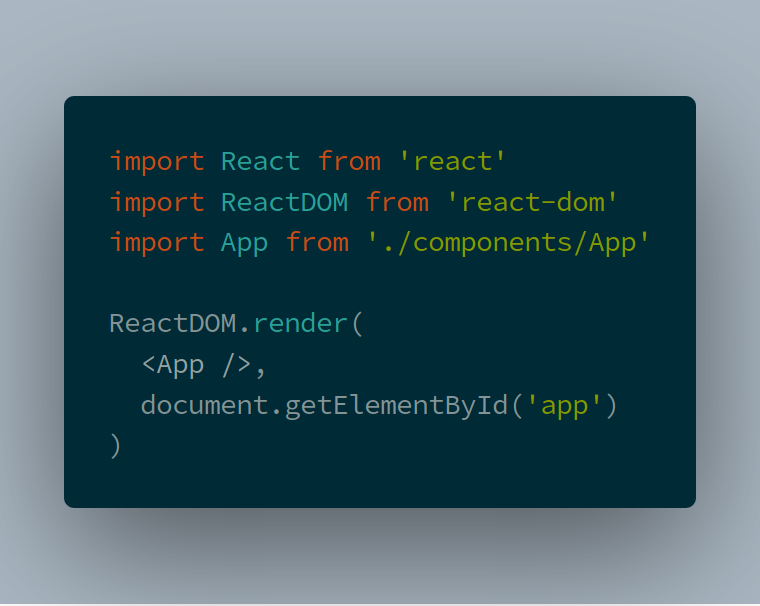 Babel is awesome. It lets us write the latest and greatest JavaScript while ensuring we have maximum compatibility with the code we ship. First thing is we have to install Babel and a few additional Babel packages to make this all work together. Don’t worry it’ll be explained soon.

Then we need to create a .babelrc in the root of our project and add the following to it:

The react preset I think is pretty self-explanatory, but, you might be wondering why we need it if React is JavaScript. That’s because Babel doesn’t know what to do with React & JSX.

NOTE: I removed the stage-2 preset from this update. If you’re wondering why, read this great post by the Babel team: Removing Babel’s Stage Presets.

So we’re making progress. Now that we have a React component with our App.js let’s make sure to create a simple associated test for that component. This way we’re starting to ensure some good practices of having tests for the things we build. We will be using Jest with Enzyme for this project. First things first, let’s install it with:

Now create /test/enzyme.setup.js and put in it: 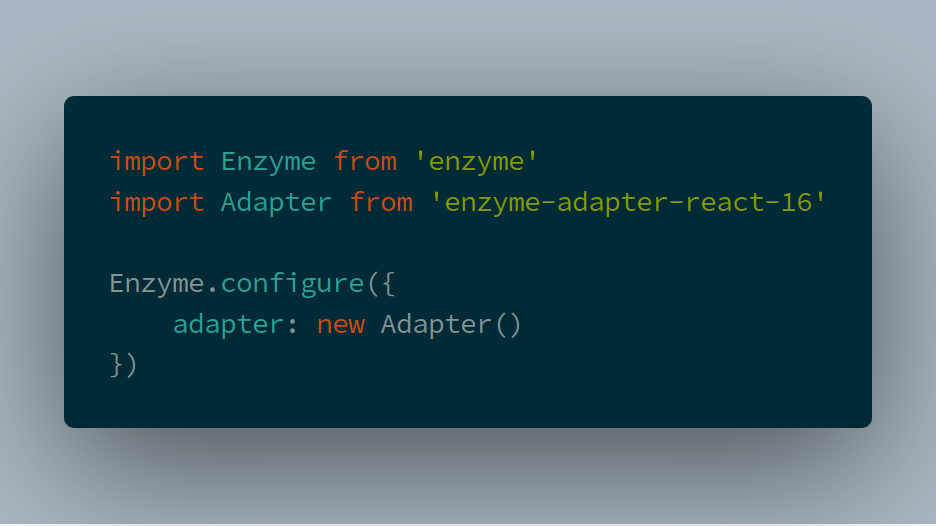 We’ll need to add Jest functionality into our package.json so add the following to it:

Next, we should add our first component test! So, create a file at /test/App.test.js to test that our App component renders as expected. We are also going to implement a snapshot test to ensure our components structure doesn’t change from test to test. To do that we’ll need the following:

You might be wondering how to run this new test. To do so we need to change the test script in the package.json to this: 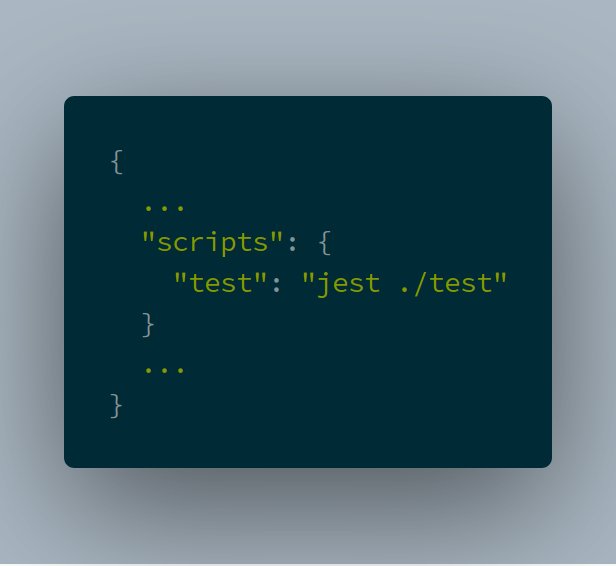 You can now run the test from your terminal with npm test and should see something like this:

If you’ve made it this far with your React boilerplate, CONGRATS! Mostly because you’ve realized that I’m using images for my code and you have to type it all out. That’s a pain in the ass, I know. Trust me though, you’re learning more than you know by being forced to type it all and the muscle memory is going to serve you well long after this tutorial.

webpack will allow us to modularize our code and easily bundle it into a single file for production. Something I think a lot of people really like about webpack though is the development server! We’ll start by just installing webpack with: 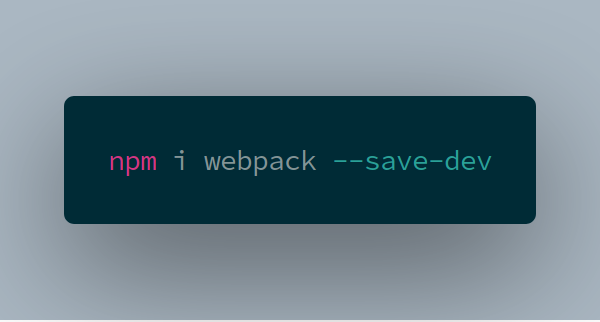 webpack looks for a webpack.config.js file by default in the root of the project so let’s create that and add to it a couple things: 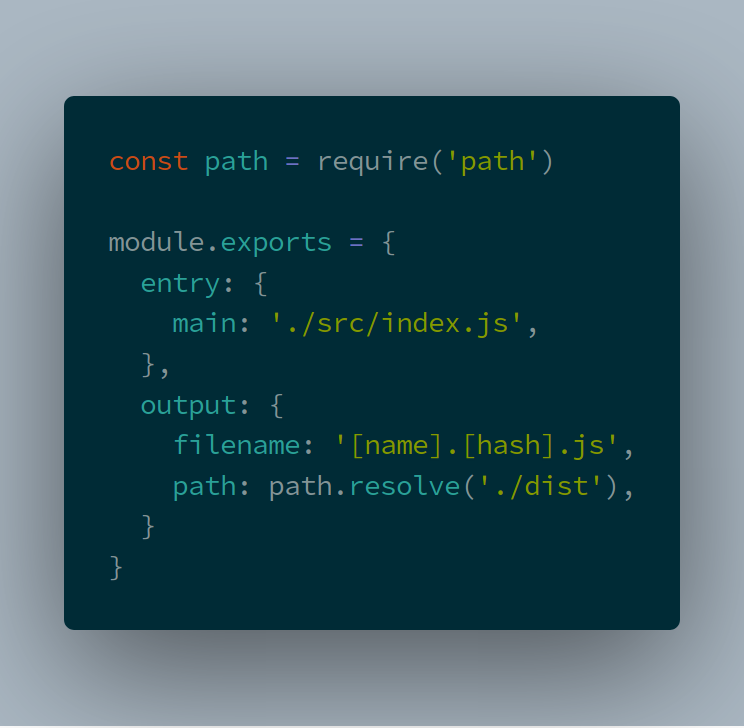 The entry is telling webpack where to find the base JavaScript file. In our application that’s index.js. Then it tells it where to output the built file when it’s done with it.

Loaders are helpful pieces we can add to webpack to make it more powerful and do things to other file types. Before webpack will work properly we need to set it up to work with ES6 and JSX. We’ll do this through the babel-loader. Add the babel-loader to your project with:

Then add the loader to your webpack.config.js like so: 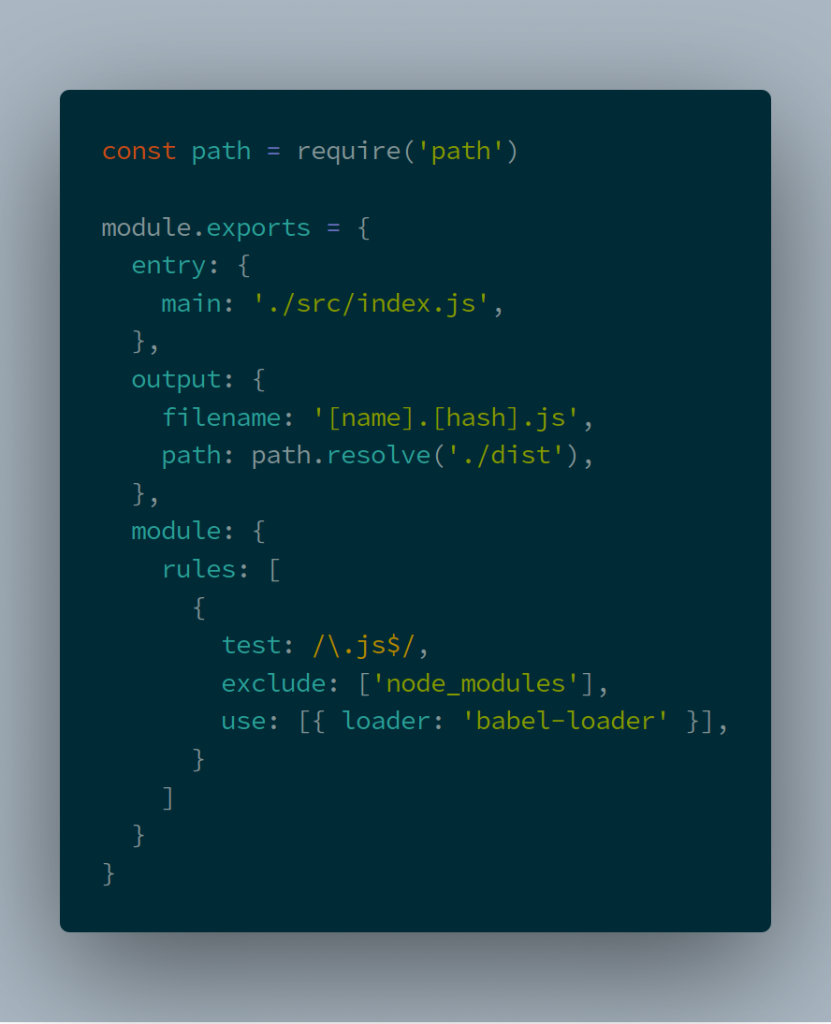 To utilize Sass and SCSS we’ll need another loader. Now to get the best “bang for our buck” we’re going to chain three loaders together so our styles are applied immediately to the DOM. Let’s install the loaders: 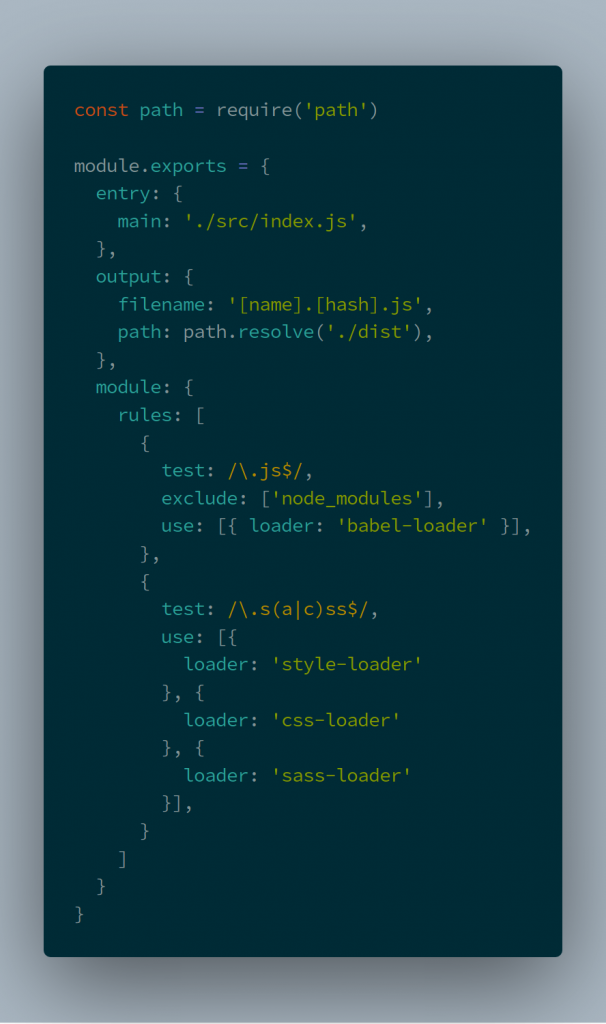 Since we just enabled some style support let’s add some. Create /src/styles/style.sass and put in it: 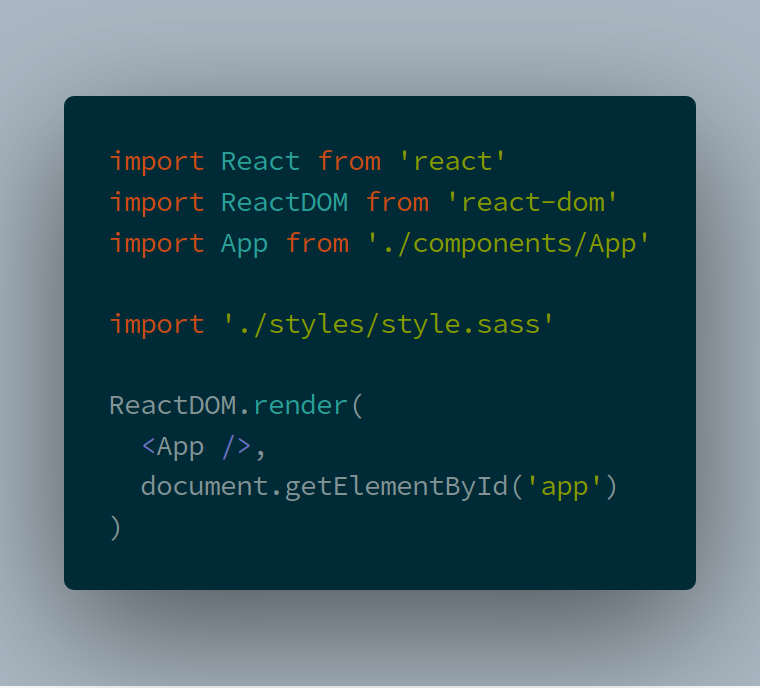 Up next are webpack plugins. So, we need a way to include the built JavaScript in our index.html and of course, there’s a way to do this automatically. This is also going to take the index.html file and drop it into our build folder (more on the build later). Let’s add the HtmlWebPackPlugin and include it in our webpack.config.js like so: 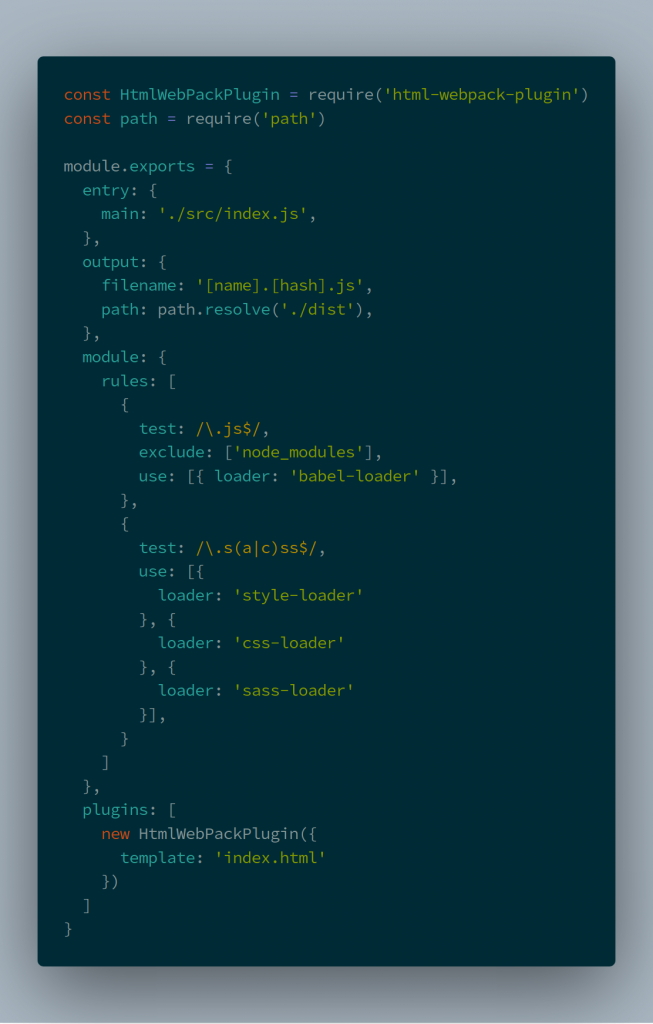 Our next plugin is going to ensure that the directory we put our build in is cleaned out of any former files every time we run a build. We do that with these two steps:

The moment we’ve all been waiting for! Let’s get the development server setup. So we’re going to add two packages in this step. webpack-cli is going to be used to run our commands from our package.json file. First:

Then update our webpack.config.js: 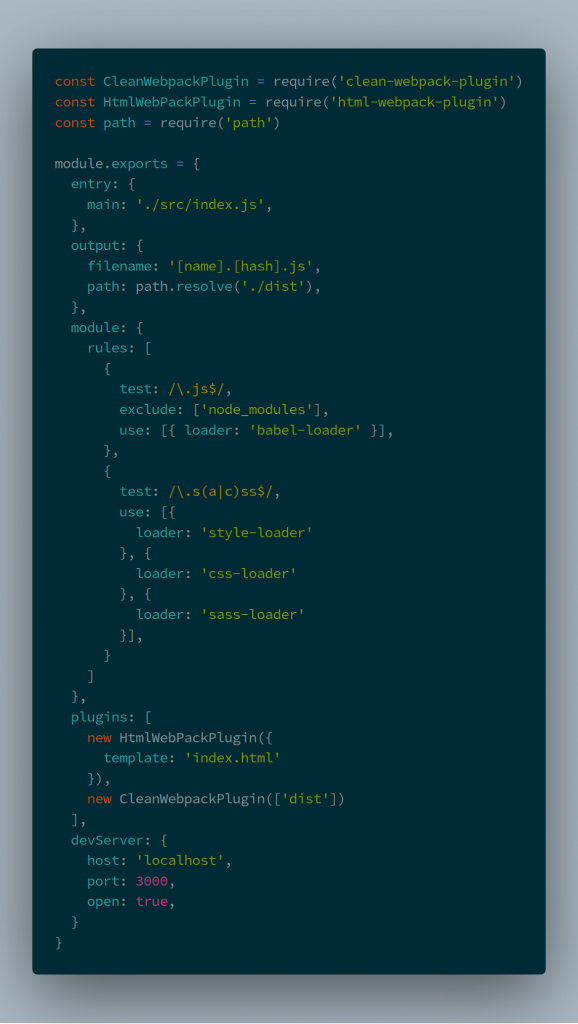 Finally add to the scripts section of the package.json: 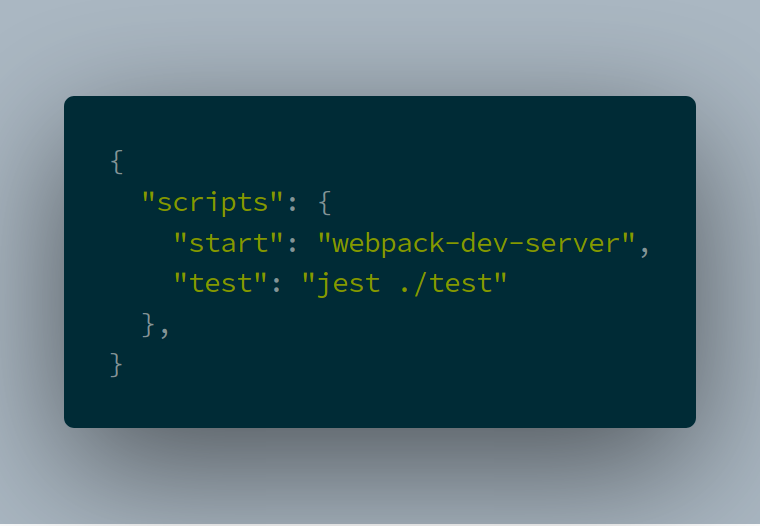 Now fire up your development server and your default browser will open. It’ll take a second while webpack does it’s thing but you’ll soon see you React live in the browser. 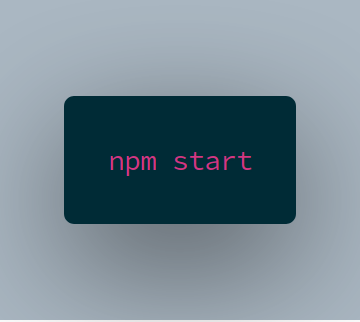 So right now we could say success! However, our code isn’t optimized for production use. However, we don’t want to optimize our code while we’re in development either because it takes a lot longer to build. So let’s create separate build files for our production and development environments and tell webpack how to handle that. I promise we’re almost done. Really we are… Up next is: 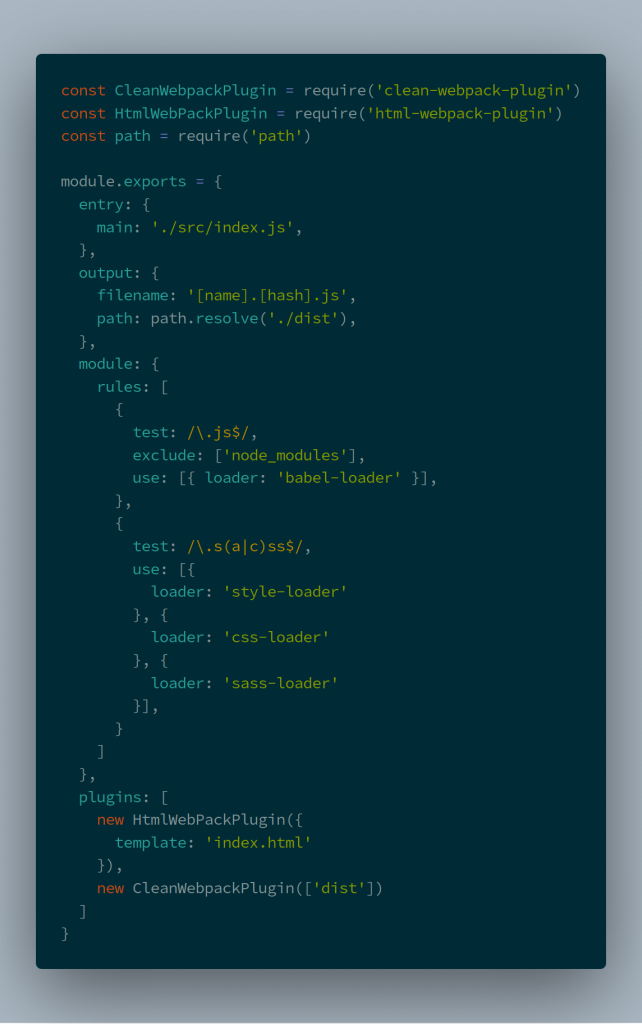 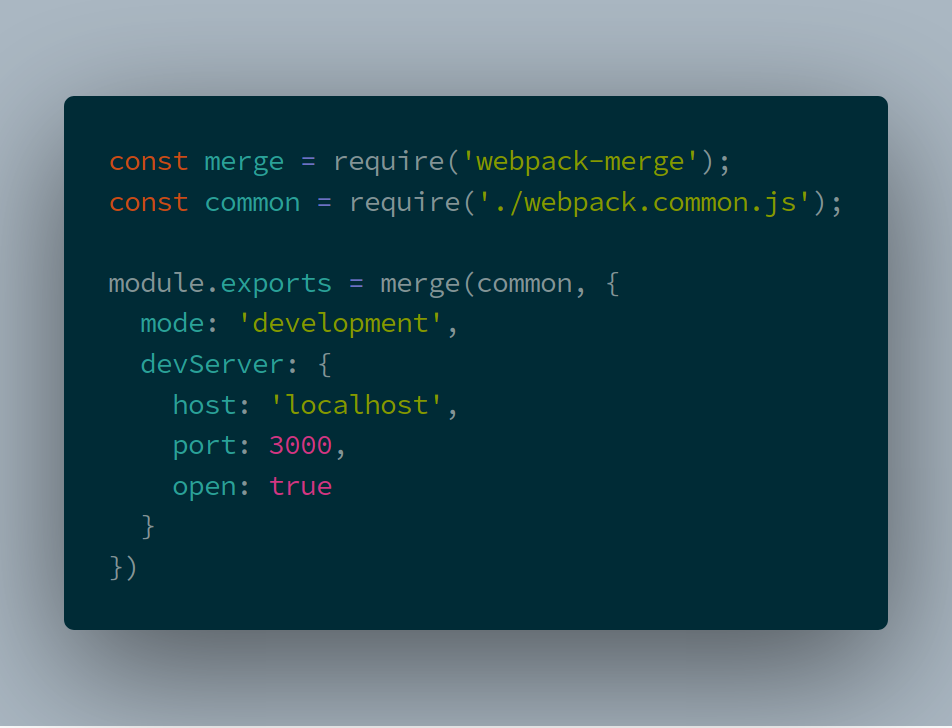 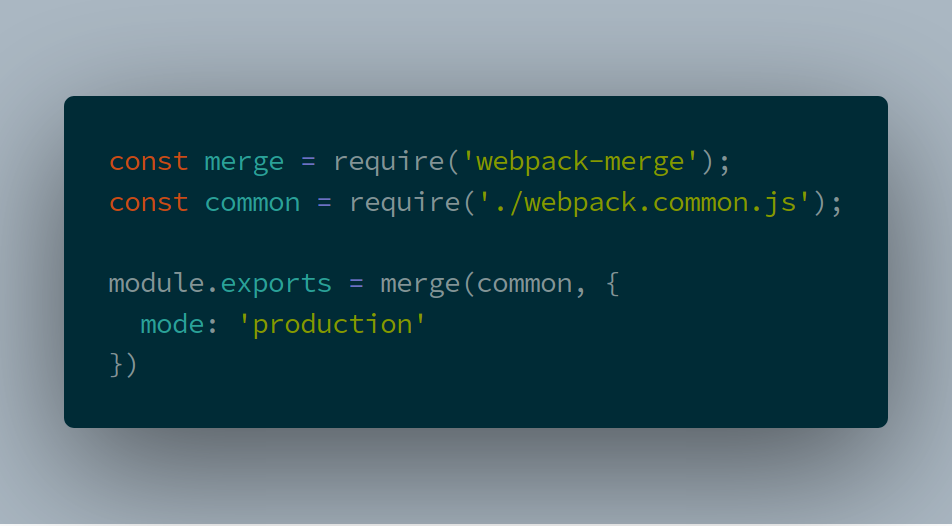 The last step here is to update the scripts in our package.json file to utilize these different files at different times. Your new scripts sections should look like:

Now you can go ahead and start your development server with:

You can build your application and have all the advantages of everything we’ve put together. When you’re ready to deploy your production application just run: 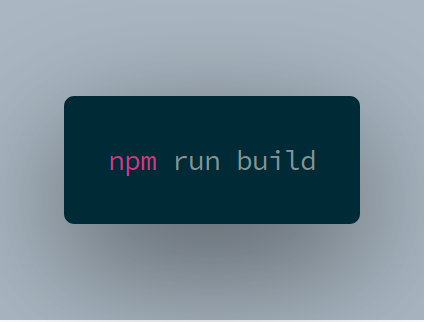 This will output an optimized version of your code into the /dist folder. Take those files and upload them to your favorite host and you’re good to go!

What’s Next With Your React Boilerplate?

Well, nothing from me! Ha, I think you’ve had enough by now. Hopefully, this empowers you to dive into creating your own boilerplate. You’ll start your personal projects steps ahead and really get an understanding of what each piece does. I HIGHLY recommend the webpack docs for further reading if you want to continue to add configuration to your webpack setup. There is A LOT more you can do with it. Another thing you might want to do is set up something like ESLint in your project as well. You can also dive deep into Babel and all that it allows you to do.

Thanks and I’d love to hear what you think about this setup. Anything you’d add, remove or change leave in the comments below.

I ALMOST FORGOT! Actually I did, I’m adding this after I clicked “Publish”. If you want to find all this code I have it in a repo here.